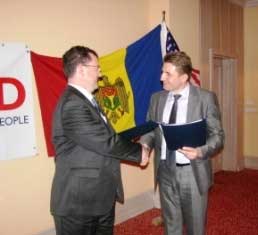 On July 8, 2016, Moldova’s new Law on Electricity and its Law on Natural Gas were published in the country’s Official Gazette, bringing the country’s primary legislation into compliance with the European Union’s Third Energy Package. Four months earlier, in March 2016, the Moldovan Parliament adopted a Law on the Promotion of Energy from Renewable Sources, establishing a much-needed regulatory framework in Moldova to attract investment in renewable energy projects.

With the support of the United States Agency for International Development, NARUC’s partnership with the National Agency for Energy Regulation of Moldova (ANRE) aims to support further alignment with EU directives. NARUC has assisted ANRE its responsibility to enact and achieve critical market reforms, and align its institutions and processes with the EU and Energy Community.

With direct contributions from US and EU regulators, the partnership has helped ANRE enact and achieve critical market reforms to align its institutions and processes with the EU. NARUC experts assisted ANRE in drafting the Law on the Promotion of Energy from Renewable Sources and the Regulation on cross-border capacity allocation and network congestion management. NARUC experts also provided support to ANRE in connection to the development and eventual implementation of the new electricity and natural gas laws.

Renewable Energy
In 2016, the country adopted a Law on the Promotion of Energy from Renewable Sources, which had been prepared and presented by ANRE in 2014. The law allowed Moldova to move much closer to implementing Directive 2009/28/EC and improving the regulatory framework needed to attract investment in renewable energy projects.

Sector Reform
ANRE concluded legal, accounting, and functional unbundling of three Moldovan distribution companies in 2015, meeting provisions of Directive 2009/72/EC and a requirement of the Second Energy Package. By implementing the unbundling requirements, Moldova ensured equality in market access and mitigated the incentives for discriminating against competitors.

EU Alignment
In July 2016, Moldova adopted an updated Electricity and Natural Gas Law, which further aligned the country’s policies with Third Energy Package requirements and helped advance implementation of electricity market rules to liberalize the electricity market. Through NARUC support on energy markets and other topics, ANRE provided specific comments and proposals within the government on these laws.

Moldova Spurs Efforts to Improve Sustainability and Energy Security
Through USAID and NARUC support, Moldova made progress toward a cleaner and more diverse energy portfolio.

Black Sea Regulators on Path to Effective Cybersecurity Strategies
With the support of USAID and NARUC, energy regulators in the Black Sea region are taking important steps forward to strengthen the cybersecurity and resilience of their energy sectors.

Black Sea Energy Regulators Tackle Cybersecurity Challenges
With the support of USAID and assistance from NARUC, utility regulators from the Black Sea convened with U.S. and EU regulatory experts for a technical workshop on cybersecurity.