Europe and Eurasia: Bosnia and Herzegovina 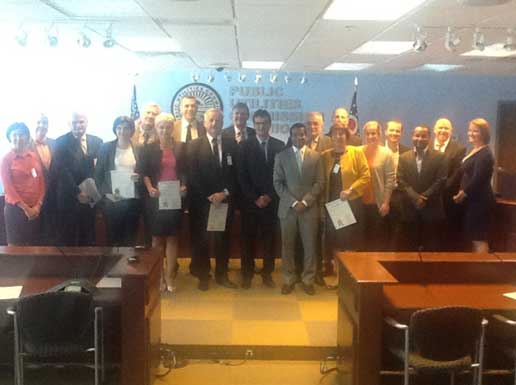 Nine BiH regulators and a NARUC technical consultant gather during a visit to the Public Service Commission of Ohio in September 2014.

FERK and RERS are responsible for regulating generation, distribution, supply and other retail functions. FERK regulates these functions in the entity Federation of Bosnia and Herzegovina, and RERS regulates these functions in the entity Republika Srpska. SERC is responsible for regulating transmission-related activities, international cross-border trade, and wholesale electricity market. Additionally, the regulatory authority over the Brcko District lies with the state regulator and includes distribution and supply.

Electricity generation in Bosnia and Herzegovina consists of a mixture of hydro and thermal production. The power sector’s robustness ensures a degree of wholesale market development, but the market rules are still under development with resulting implementation issues to be tackled.

The retail market has been fully open since January 2015. Customers who do not switch their supplier may be supplied by the public suppliers at regulated prices. Due to cross-subsidization, the regulated prices are much lower than the market price.

With the support of the United States Agency for International Development, NARUC engaged with regulatory agencies in Bosnia and Herzegovina (BiH) to support the country’s efforts to align its policies with EU requirements. Along with its participation in NARUC’s regional projects, BiH regulators worked with NARUC on market reforms, electricity retail market frameworks, public engagement, and other critical issues.

The partnership produced enhanced wholesale and retail electricity markets as well as greater capacity and institutional knowledge within the regulatory agencies to adopt reforms mandated by the EU. This work  supported the harmonization of BiH’s regulations toward market-oriented reforms designed to meet the Energy Community’s norms and practices and promote the integration of the BiH energy sector into the broader Southeast and European Energy Market and energy trading bodies.

Public Engagement
SERC, FERK, and RERS adopted amendments to the Eligible Customer Supply document in November, October, and December 2014, respectively. The document determined the conditions and procedures for when a supplier of last resort can supply a customer, the rules for customers switching suppliers, and other matters.

Communications
In collaboration with USAID EIA and BiH regulators, NARUC prepared a draft Communications and Customer Education Best Practices and Guidelines document that provided case studies and concrete steps related to the development of the websites and related communications efforts of the regulatory Commissions, such that BiH regulators can more effectively educate the public on the energy sector. A finalized version of the document was completed in March 2017.

Regulatory Commission for Electricity in the Federation of Bosnia and Herzegovina