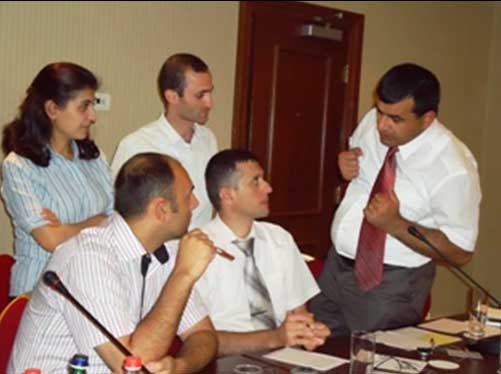 NARUC experts and PSRC staff discuss promotion of renewables at a partnership exchange in June 2012 in Yerevan, Armenia.

Armenia has reformed its power sector, which includes unbundling of a vertically integrated electricity subsector and privatization of the entire power and gas distribution networks, and of most generating companies.

With the support of the United States Agency for International Development (USAID), NARUC supported the Public Service Regulatory Commission (PSRC) of Armenia to help increase its capacity to implement market reforms and improve the quality and effectiveness of its regulation.

NARUC experts assisted PSRC in drafting laws on promotion of competitive wholesale electricity markets and use of energy from hydropower and natural gas, while also working with the regulator to address other key needs. NARUC also facilitated interactions and engagement between Armenian officials and those from neighboring countries, notably Georgia, as well as among regulators through the Black Sea Regulatory Initiative.

While the bilateral partnership has completed, Armenia continues to participate in regional projects with NARUC, including in efforts to strenghten cybersecurity and resilience across the Black Sea region.

Licensee Oversight
NARUC supported Armenia’s path toward a more open and competitive market by providing assistance to PSRC on auditing practices through a NARUC consultancy and a job shadow in 2016-2017. NARUC supported PSRC in its review and revision of internal processes and procedures necessary to perform effective oversight of licensees in the electricity sector, work that led to the development of a Monitoring Rule and Investment and Procurement Monitoring Procedures.

In addition to the drafting of the rule and procedures intended to guide PSRC’s monitoring and auditing of licensees, NARUC’s work on the subject resulted in PSRC’s decision to transition to more comprehensive compliance audits and long-term network development plans. PSRC also decided to begin a concerted effort to work constructively with utilities through corrective and remedial action plans as opposed to pursuing the strict application of penalties and fines for violations and non-compliance. This marked a fundamental conceptual change in how PSRC interfaced and interacted with utilities, one that was important as the country transitioned to a more competitive energy sector.

Black Sea Regulators on Path to Effective Cybersecurity Strategies
With the support of USAID and NARUC, energy regulators in the Black Sea region are taking important steps forward to strengthen the cybersecurity and resilience of their energy sectors.

Black Sea Energy Regulators Tackle Cybersecurity Challenges
With the support of USAID and assistance from NARUC, utility regulators from the Black Sea convened with U.S. and EU regulatory experts for a technical workshop on cybersecurity.