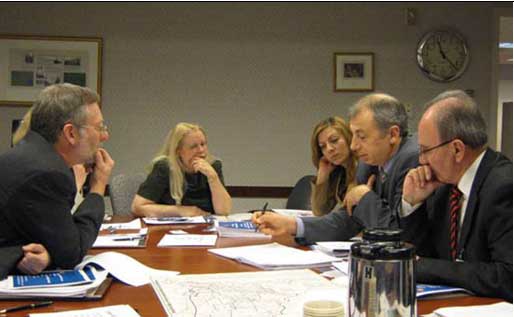 U.S. and Albanian regulators meet in March 2010 to discuss the oversight and management of the U.S. natural gas sector.

Like many national regulators in the region, the Albanian Electricity Regulatory Authority (ERE) has played an important role in its country’s efforts to align policies with those of the European Union and the Energy Community. Of note, the Government of Albania in 2008 tasked ERE with establishing a regulatory framework for the natural gas sector in Albania. The introduction of the legislation was based on the Energy Community Treaty Gas Roadmap provisions, in accordance with EU Directive 2003/55/EC and Regulation 1775/2005/EC.

ERE also played a key role in responding to the 2015 launch of the Regulation on Wholesale Energy Market Integrity and Transparency (REMIT) requirements by Europe’s Agency for the Cooperation of Energy Regulators (ACER).

Supported by the United States Agency for International Development (USAID), NARUC’s work with the ERE supported the regulator’s capacity to establish a regulatory framework for natural gas and align its power and gas sectors with EU requirements. NARUC’s support for ERE aimed to respond to the country’s efforts to adopt and implement EU energy reforms designed to foster competition in the energy sector, facilitate regional integration, and increase transparency.

Early in the partnership, NARUC assisted ERE on the establishment of a national natural gas regulatory framework, which it had been tasked to create in 2008. Through a targeted technical assistance in the fall of 2015, NARUC collaborated with ERE to respond to the launch of the REMIT requirements.

Market Transparency
ERE implemented NARUC recommendations to enhance transparency in the Albanian electricity market in early 2016. Specifically, ERE sent a letter to market participants seeking their comments on data and information that ERE’s Market Monitoring Office planned to request in order to comply with EU requirements.

With this information, ERE was able to crosscheck data to monitor the relationship between cost and price, one of the important identifiers of competitiveness in any market. By the fall of 2016, ERE had begun receiving data from market participants in monthly, daily, or hourly bases using the templates developed through the NARUC assistance.