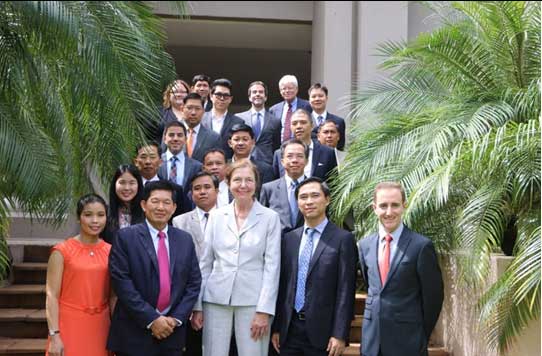 The countries of the Lower Mekong sub-region in Southeast Asia are politically, socially, and economically diverse, but possess a shared desire to improve their power sectors. Conventional energy sources make up a majority of existing generation capacity, and the region is heavily dependent on expensive, imported fossil fuels like coal and natural gas. Additionally, large-scale hydropower resources are abundant, though limited by seasonal variations.

Renewable energy capacity, including wind and solar, is currently limited though is expected to grow. The region is undergoing tremendous economic growth, resulting in increased electricity demand. The development of new clean energy resources will be vital to decouple economic growth from greenhouse gas emissions.

To facilitate increased usage of clean energy, regional officials will need to coordinate on several key challenges, including how to balance and dispatch renewable resources as well as ensuring proper cost allocation and pricing for regional power trade. Additionally, resource planning and energy efficiency will provide countries with opportunities to lower costs while optimizing the use of regional energy resources.

Supported by the United States Department of State, NARUC’s work in the Lower Mekong aims to foster regional cooperation and improve capacity of national regulators and those performing regulatory functions.

Regional Cooperation
Based on a NARUC recommendation through the Lower Mekong Initiative, regional regulators recently announced that they now participate through the ASEAN Energy Regulators Network (AERN) in ongoing discussions to harmonize grid standards to support regional trade as part of the ASEAN Power Grid (APG) project. The working group on grid standards was previously made up of utilities only; involvement of regulators will allow for the development of broader framework guidelines to support cross-border interconnection.

Southeast Asian Regulators Work to Advance Energy Security
With the support of the U.S. Department of State, NARUC supported regulators in Southeast Asia by offering a platform to collaborate to advance regional market development.