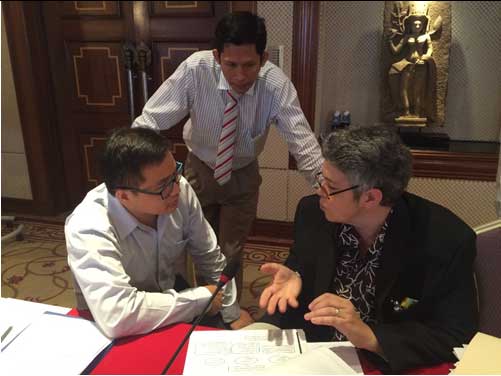 In 2001, the Kingdom of Cambodia adopted a new Electricity Law, which created the Electricity Authority of Cambodia (EAC). With limited electricity access throughout the country, expanding electricity supply and grid connection were early priorities of EAC.

Cambodia now has over 300 suppliers, many of which are small and isolated from the national grid. In 2003 and 2004, EAC issued regulations on conditions of supply and performance standards, respectively. As electricity access has expanded, EAC has committed to enforcing these regulations to improve electricity service quality in Cambodia.

With support from the Power Sector Program of the Bureau of Energy Resources (ENR) of the U.S. Department of State, NARUC's work in Cambodia is designed to enhance the EAC's ability to improve the country’s electricity service. The partnership aims to bolster EAC’s capacity to implement regulations on performance standards and conditions of supply while simultaneously strengthening service quality and customer service measures in the country.

Data Collection
In response to a NARUC recommendation, EAC contacted the more than 300 suppliers throughout the country in late 2015 to inform them of new data collection and reporting requirements. EAC identified 10 categories for collecting performance data, such as those relating to interruptions, outages, metering complaints, and requests for connections, among others. As of 2017, all suppliers in the country were currently collecting data for these categories and reporting to EAC.

Consumer Education
Starting in 2015, EAC required suppliers to include monthly consumption information from the previous twelve months on customer bills – this way, consumers could evaluate whether their electricity consumption was on par with what it was a year ago, rather than simply higher than it was during the cooler months.

This change has resulted in a reduction in consumer complaints about billing. EAC officials also implemented NARUC’s recommendation to include a hotline number on bills for customers to more easily obtain information and resolve issues directly with suppliers when necessary.

Cambodian Regulator Eyes Improved Service through Data Collection
With the support of the U.S. Department of State and NARUC, the electricity regulator in Cambodia improved its processes for collecting key data from electricity suppliers.

Cambodian Regulator Seeks Higher Quality Service for Consumers
With the support of the U.S. Department of State and NARUC, the Cambodian regulator for the electricity sector took significant steps to improve electricity service quality for consumers.