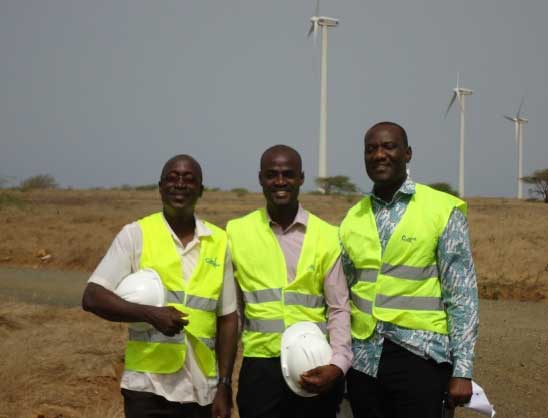 Regulators from Ghana turn a wind farm during a technical workshop in Praia, Cape Verde, in May 2013.

The Economic Community of West African States (ECOWAS) work to promote economic integration amongst its fifteen member countries in the region. These countries have both cultural and geopolitical ties and shared common economic interest.

In 2008, the Member States of ECOWAS established the Regional Electricity Regulatory Authority (ERERA) as the regional regulator for cross-border electricity interconnections in West Africa. Member states share the goal to put in place the appropriate legal and institutional environment for the development of the electricity sector of West Africa.

The total population in the ECOWAS region is estimated to be 340 million people, two-thirds of which live in three countries: Nigeria, Ghana and Côte d’Ivoire, which also are the most advanced economies of the region. In 2009, it was estimated that approximately 70% of the population—approximately 176 million people—lived without access to electricity.

ECOWAS aims at increasing cross-border electricity connections and trading among ECOWAS Member States to increase electricity generation and access among all Member States. In support of this goal, ERERA is providing the economic and technical regulatory framework.

With support from the United States Agency for International Development (USAID) and Power Africa, the West Africa Regional Regulatory Partnership is uniquely positioned to assist the regional and national regulators in the ECOWAS region in improving their existing tariff methodologies.

Regional Cooperation
ERERA facilitated an international power purchase agreement between Ghana and Burkina Faso by providing a study of the framework for the commercial and contractual arrangements of the interconnection.

Technical Workshop on Using the Principles of Regulating Clean Energy to Advance Renewable Energy in the ECOWAS Region
April 24 - 25, 2014