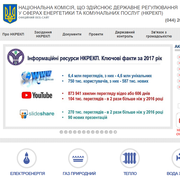 January 2018 – Ukraine’s energy regulator has won accolades for a website redesign that increased the agency’s transparency and eased consumer engagement following assistance from the US Agency for International Development and the US National Association of Regulatory Utility Commissioners.

The National Energy and Utilities Regulatory Commission (NEURC) was awarded second place for best government website in Ukraine in 2017. The award was based on an assessment conducted by the Secretariat of the Commissioner for Human Rights of the Verkhovna Rada of Ukraine as part of a UNDP and the Council of Europe project to enhance access to the public and media for information and transparency, primarily through the web.

NEURC launched its newly redesigned website in 2015, drawing ideas from its USAID-supported engagement with NARUC and US regulators.

NEURC staff report that its homepage drew significant inspiration from that of the Public Utilities Commission of Ohio. NEURC’s website also added many features staff saw on the website of the Kentucky Public Service Commission, including the publication of all decisions and protocols of the commission’s decisions, as well as live broadcasts and recordings of commission meetings.

“The NEURC website plays a significant role in ensuring the openness of the Ukrainian regulator,” said a NEURC representative. “In 2015, there was a release of the site with the overall change in graphic design, structure and navigation based on the Kentucky and Ohio commissions’ websites. NEURC plans to continue introducing new web tools with NARUC’s assistance that will allow the consumers to get easier access to information on the cost and quality of energy resources.”

In line with US best practices, NEURC decisions, minutes and videotapes of meetings, acts of inspections, draft regulatory acts, annual budgets and other materials are published online. NEURC’s overhaul achieved internal goals to make its operations and decision-making more open to the public and meet requirements under Ukraine’s Law on the Regulator and the Law on Electricity Market.

“The NEURC website plays a significant role in ensuring the openness of the Ukrainian regulator,” said a NERUC representative.

Andrew Melnykovych of the Kentucky Public Service Commission, who has played an important role in supporting NARUC’s work with Ukraine, said the website has improved considerably through USAID and NARUC engagement.

“The NEURC website is vastly improved and compares favorably to the best utility commission websites in the US in terms of design, intuitiveness and ease of use,” Melnykovych said. “The customer tools that are available on the website are not overly complex and appear to be highly functional. The availability of a livestream of NEURC proceedings is a major step forward in improving transparency and building public confidence in NEURC.”

As market reforms continue, NEURC expects to continue to leverage USAID/NARUC partnership activities as it bolsters its communications efforts and its public accountability.