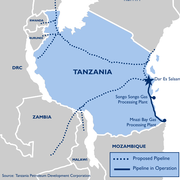 July 2017 – Tanzania is just beginning to utilize its natural gas resources. The country has seen its known natural gas resources quadruple to over 57 Tcf in recent years, and new gas pipelines into Dar es Salaam are leading to an exponential increase in the use of gas for power generation.

As Tanzanians increasingly depend on natural gas to keep their power plants running, the country’s energy regulator — the Energy and Water Utilities Regulatory Authority (EWURA) — is tasked with developing rules to ensure that the natural gas system operates safely and reliably.

Progress is being made, as the regulator recently advanced key safety rules for midstream and downstream gas activities through the assistance of the U.S. Agency for International Development (USAID) and Power Africa.

Enabling Safe, Reliable Movement of Gas
These rules, once final, will help fill a necessary gap in the regulatory framework for gas operations in Tanzania. The safe and reliable provision of natural gas to electricity generation stations, in turn, will increase Tanzania’s generating capacity and help the country to phase out expensive and higher-emitting diesel electricity generators.

Through the support of USAID and Power Africa, the National Association of Regulatory Utility Commissioners (NARUC) has worked to strengthen EWURA’s capacity to oversee Tanzania’s power and gas sectors. NARUC experts engaged with EWURA officials during an August 2016 workshop to peer review draft versions of the rules, which address distribution pipelines near populated areas and long-distance transmission lines.

Building Technical Capacity
During the peer review, NARUC experts offered recommendations on the draft rules, including on areas to enhance consistency and clarity and provisions that would need be fleshed out in subsequent codes or standards. NARUC experts also shared best practices on the technical and procedural aspects of safe and reliable gas operations as well as best practices for conducting safety inspections.

To the latter, NARUC experts highlighted the benefits of creating a manual which would contain the protocol for each type of inspection and shared best practices on how frequently these inspections should occur.

Tanzania’s natural gas pipeline system currently moves gas from processing plants in the south up to the capital of Dar Es Salaam, where the Kinyerezi natural gas power plant complex is enabling progress toward a cleaner and more reliable electricity system. Plans are also underway to build the infrastructure to move gas from Tanzania throughout East Africa, which would dramatically reshape the region’s energy sector.

Next Steps
EWURA staff integrated many comments and recommendations into later iterations of the rules and in June submitted them to EWURA’s Electricity and Natural Gas Board Committee for review. Approval by the board is necessary before the rules can be offered for public comment and finally gazetted.

“EWURA again would like to confirm our appreciation to NARUC for contributions extended to EWURA and hope to continue receiving assistance in shaping other Regulations/Rules to be made in future,” said Eng. Thobias P. Rwelamila, Gas Distribution Manager at EWURA.

The rules come as EWURA is also working to advance Third Party Access rules for the natural gas sector, which will outline the regulations related to third parties' access to Tanzanian petroleum facilities.

Through the support of USAID and Power Africa, NARUC is committed to supporting EWURA as it supports safe, reliable gas transportation through sound regulations.