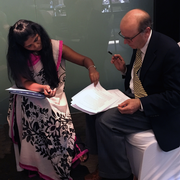 July 2017 – Amid efforts to meet growing demand for electricity in the country, the Public Utilities Commission of Sri Lanka (PUCSL) is working to better engage with the country’s utility in the generation planning process.

Plans are underway that would put the Sri Lankan electricity sector on a more reliable and efficient path, but the process for reaching consensus between the regulator and the utility on a plan has been lengthy and inconsistent.

The U.S. Department of State’s Bureau of Energy Resources, Power Sector Program
is helping the PUCSL better engage with Sri Lankan utilities through the assistance of the U.S. National Association of Regulatory Utility Commissioners (NARUC).

This work, launched in 2016, is already bearing fruit, as the PUCSL has implemented a number of changes to its processes to promote closer coordination between it and the country’s main utility, Ceylon Electricity Board (CEB).

Strengthening the Review Process
During an activity in Colombo in November 2016, NARUC experts provided targeted feedback to PUCSL officials on how to review CEB’s Long Term Generation Expansion Plan (2015-2034), which outlines the country’s planning for the least-cost, most-efficient way to maintain a reliable energy supply and promote grid development.

The plan is updated and submitted by CEB to the PUCSL every two years. The PUCSL has full jurisdiction in approving or rejecting the plan. But having only recently started fully reviewing the plans, the PUCSL is striving to strengthen its review process. The regulator aims to ensure that all technical areas within the plan are technically sound and consistent with overall policy objectives as CEB plans for the future development of the Sri Lankan electricity sector.

“The views of all stakeholders are important when approving a national level plan.”

In discussions about the PUCSL’s work with CEB, NARUC experts shared how closer coordination between the utility and regulator can help to speed up review and improve the generation expansion plan overall. Regulators from New York and Hawaii noted that they worked closely with their utilities throughout the generation planning process, which ensured the regulator was aware of the utility’s broader goals and the contents of the plan before it was officially proposed.

Taking Steps Forward
NARUC experts also recommended that the PUCSL give a more robust role to stakeholders in the process of reviewing and approving the plan. Greater stakeholder participation is key, NARUC experts said, to mitigating risk and ensuring stakeholder buy-in and a positive public image.

The PUCSL has in turn taken significant steps to implement this recommendation. The regulator has released the proposed plan on social media, newspapers and its website in an effort to reach out broadly to the public. Additionally, PUCSL is encouraging the public to become more involved in the plan and is asking the utility to respond to public comments as the plan is updated. The PUCSL has also held some preliminary public consultations on key inputs for the plan.

Benefits of Best Practices
The PUCSL also now intends to ask CEB to expand how it evaluates its plan against a range of scenarios and expectations by conducting a sensitivity analysis and testing various models, Mr. Herath said.

Best practices shared through the partnership have been very useful, Mr. Herath said. He highlighted lessons learned on how to have close communication with the utility. In these and other areas, the PUCSL has increased its efforts, he said.

As the PUCSL moves ahead in working with CEB on the generation expansion plan, the State Department and NARUC are working with the regulator on other key issues, including demand side management and performance-based regulations.