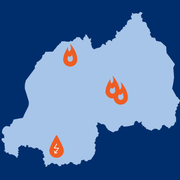 May 2017 – As Rwanda seeks to expand its power sector, the Rwanda Utilities Regulatory Authority (RURA) plays a critical role in ensuring that decisions on power purchase agreements (PPAs) are in the best interest of the country.

With the support of Power Africa and the US Agency for International Development (USAID), the National Association of Regulatory Utility Commissioners (NARUC) has assisted RURA in building a more effective and efficient PPA review process, work that is already producing notable successes.

In the months since, RURA officials say the checklist has helped to solidify the regulator’s role in PPA review and built capacity and confidence within the regulator. RURA has reviewed several PPAs from independent power producers (IPPs) since the checklist was developed (see box at right), paving the way for new megawatts to come online as early as June 2017.

RURA has also said it will further refine the checklist in line with its needs and priorities and submit the revised document to its board for approval.

Improving the PPA Review Process in Rwanda
Since beginning work with NARUC on the PPA Checklist in July 2016, the Rwanda Utilities Regulatory Authority (RURA) has reviewed PPAs for two projects totaling more than 30 MW of power in the country:

At the same time, NARUC’s partnership with RURA is helping to foster strong linkages between RURA, IPPs and traditional utilities. During an October 2016 forum, RURA acknowledged that it needed to improve its process for engaging with IPPs, while at the same time articulating its expectations for reporting of financial and other Key Performance Indicator (KPI) data.

This discussion helped the licensees in the room better understand RURA’s reporting expectations, which should improve compliance going forward. The forum also provided IPPs a platform to communicate their views to RURA, which was important given that IPPs are newer entrants to the market and have thus far had limited physical interactions with RURA.

Through its work on the PPA Checklist and stakeholder engagement, NARUC is supporting RURA in driving new megawatts and connections in Rwanda and across East Africa.