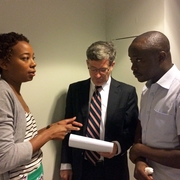 September 2016 – Private power generation in Rwanda is on the rise. Since 2011, the state-owned utility has signed more than a dozen power purchase agreements (PPAs) with independent power producers, with this trend set to continue in the years ahead.

Amid growing investment opportunities for independent generators, Rwanda’s electricity regulator — Rwanda Utilities Regulatory Authority (RURA) – is working to strengthen its ability to evaluate and review PPAs. Given the significant financial implications for electricity ratepayers and Rwandan taxpayers, RURA officials want to be sure that projects are cost-effective, viable, and in the interest of consumers and the country.

Developing a Checklist
With the support of the United States Agency for International Development (USAID) and Power Africa, the National Association of Regulatory Utility Commissioners (NARUC) is working with RURA to make this happen.

At a recent peer review activity in Kigali, Rwanda, NARUC experts worked with RURA and Rwandan energy sector stakeholders — including representatives from the state utility Rwanda Energy Group (REG), the Rwanda Development Board (RDB), Energy Private Developers (EPD) and Rwanda’s Ministry of Infrastructure — to develop a draft checklist for RURA to use in PPA reviews.

The checklist allows for a more systematic and comprehensive regulatory review of PPAs. It offers a range of considerations – legal, financial, technical and others – while also providing recommendations on how to review PPAs in an open and transparent fashion.

The draft checklist also comes at a critical time for PPAs in Rwanda, as the Rwandan government earlier this year enacted a new law emphasizing competitive procurement of power projects.

Streamlining Path to Greater Power Generation
In line with Power Africa priorities, the draft checklist will help lay the groundwork to streamline the process of bringing additional power generation online through competitive means, while simultaneously ensuring that PPAs are in line with least-cost, best-fit planning principles. The checklist will enable RURA to better manage the Rwandan power system and provide certainty to the PPA review process.

During the recent activity, NARUC experts discussed further recommendations with RURA and others on how to improve the PPA review process, including adding confidentiality measures and integrating PPA review with general system planning.

While RURA is not specifically mandated to consider energy system planning issues in its work, NARUC recommended that determination of need and system planning feature as central elements of the PPA review process. This ensures that customers are not locked into overly expensive power generation resources in the long term.

“Since the 2004 energy crisis in Rwanda, the review process for PPAs was not that stringent. We almost accepted every project that would offer additional power to the National Grid without thorough assessment of their impact on the ratepayers.

The situation is different now; as a regulator, we want to be more involved. We can’t afford to accept overly expensive PPAs anymore.”
— Alexis Mutware, Acting Director of Electricity and Renewable Energy, RURA

Eng. Alfred D. Byigero, Head of the Department for Energy, Water and Sanitation Regulation at RURA, said during the activity that the regulator needs to think more about the role of a consumer advocate similar to the one seen in the U.S.

“There are some good aspects there that can be easily incorporated in the way we are structured so that we can be proactive and better respond to consumer interests,” Byigero said. “For me, I take it as a wake-up call so that we can start to fill some gaps in how we do things.”

The Work Continues
Looking ahead, RURA will work with NARUC and energy sector stakeholders to refine key elements of the draft checklist and ensure it is best tailored to the local context. This will complement efforts by the U.S. Government’s Commercial Law Development Program (CLDP) to strengthen PPA frameworks in the region.

Together with its partners at USAID and Power Africa, NARUC remains committed to helping electricity sector regulators better manage their sectors and unleash opportunities for private investment and development in East Africa.