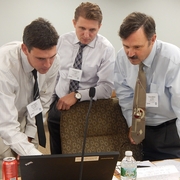 September 2016 – Like other countries in the Black Sea region, Moldova is working to shift toward a cleaner and more diverse energy portfolio, in line with efforts to bolster environmental sustainability and energy security.

With the support of the United States Agency for International Development (USAID), Moldovan officials recently helped the country make progress in this direction. In early 2016, the Moldovan Parliament approved the Law on the Promotion of Energy from Renewable Sources. It will enter into force on March 25, 2017.

Critical to Clean Energy
The law will assist the country in securing more clean domestic generation, thereby reducing greenhouse gas emissions. The law will also help to increase competition among generators as the country transitions toward a more competitive, market-focused energy sector. Moldova is an aspiring EU member, and the move toward competition and clean energy complies with EU regulations.

The National Agency for Energy Regulation of Moldova (ANRE) worked on the development of the law with NARUC -- in particular with regulators from the Maine Public Utilities Commission. NARUC provides this support under a cooperative agreement from USAID. ANRE, an independent regulatory body, eventually proposed the law to the Ministry of Economy for consideration by the government.

About NARUC’s Partnership With Moldova
With USAID’s support, NARUC’s partnership with ANRE aims to support Moldova’s energy security and integration into European markets. NARUC in partnership with USAID will continue leveraging its support to ANRE in critical energy market reforms and to help the country align its processes with the EU Directives.

Working with NARUC over several years, ANRE drew from the experience of Maine and other U.S. states that have had success in promoting small- to medium-scale renewable energy through net metering, bidding processes and other policy mechanisms.

In doing so, ANRE was able to draw from the diversity of U.S. state commissions in drafting a policy solution that met Moldova’s needs and goals. NARUC experts lent their expertise on clean energy, regulation and policy ideas during the drafting process.

A Focus on Renewable Energy
Through NARUC assistance, ANRE also proposed a program to support greater opportunities for renewable energy. Under the program, electricity generated from a renewable source, such as solar panels, will be purchased by a designated supplier. All eligible power generators are selected through a competitive bidding process, and the guarantee is good for 15 years.

ANRE also redesigned its certification process for renewable energy resources to include a guarantee of origin system. This is used to prove that the energy was generated by a renewable source. This is an important part of EU energy regulation, and Moldova’s compliance brings it in line with EU requirements. The new certificate process makes it much easier for consumers and market participants to understand when their electricity was generated by a renewable source.

ANRE is now tasked with developing an updated regulation on guarantees of origin and to standardize the terms and conditions of the energy purchase contract. Officials also have to develop a regulation establishing auction rules and other provisions as dictated by the new law.

With its partners at USAID and in the region, NARUC is committed to assisting ANRE and other Black Sea regulators as they work to strengthen economic growth and better secure their energy sectors.