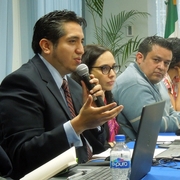 June 2016 – Officials with the Mexico Energy Regulatory Commission (CRE) have a vision for where the country’s power system needs to go. Building on their expertise and the goals of the country’s energy reform, they’re working diligently to create a system based on reliability, transparency and stakeholder involvement.

With the support of the United States Agency for International Development (USAID), Beltrán and other CRE staff are working with the National Association of Regulatory Utility Commissioners (NARUC) to adopt regulations and practices to bring this vision forward. NARUC partners with CRE to offer trainings and expert-level assistance to meet CRE’s needs and help the country reach its goals.

Recommendations for Grid Code
NARUC supported CRE through the development of the landmark Grid Code, which defines the efficiency, quality, reliability, safety and sustainability criteria for the national electric grid. Published in April 2016, the grid code is meant to explain and determine the requirements that market participants and stakeholders must follow, as defined by CRE’s role in ensuring reliability under the energy reform.

CRE implemented numerous provisions into the Grid Code based on the recommendations of NARUC and the experts offered through the NARUC/CRE partnership, Beltrán said. For instance, CRE took a NARUC recommendation to create open reliability criteria based on performance-based goals rather than set prescriptive rules that dictate how compliance must be achieved.

The Grid Code also reflects recommendations about the concept of an adequate level of reliability (ALR) made by the North American Electricity Reliability Corporation at a February 2016 NARUC workshop. The ALR defines the minimum levels of reliability criteria needed to operate the electric grid.

Ensuring Reliability and Performing Stakeholder Outreach
Previous to NARUC assistance on this topic, CRE had prepared a preliminary draft of the ALR. However, with the assistance from U.S. experts, CRE adapted U.S. and international experiences regarding the ALR and created a final Mexican-specific definition that harmonized those best practices with Mexico’s needs and context, Beltrán said.

Based on recommendations from NARUC workshops, CRE is also launching an Advisory Committee on Reliability, which will ensure that CRE’s implementation of their reliability- and quality-related duties under the energy reform reflects the needs of stakeholders.

The committee builds stakeholder involvement into the evaluation of current criteria and decision-making on future reliability matters, and will include manufacturers and academics as well as the country’s electric utility (CFE) and grid operator (CENACE).

The committee will hopefully serve as a reference for similar structures going forward, Beltrán said, and is line with CRE priorities of transparency and inclusivity.

Benefits of Partnership
A key part of USAID and NARUC support, CRE officials have said, is the partnership’s role in bringing in experts from U.S. regulators and industry and connecting officials from different energy agencies in Mexico. “Five minutes of discussion is more fruitful than 100 emails,” Beltran said, saying that CRE acts as the “bridge” between NARUC’s experts and officials from CENACE, CFE, and SENER, Mexico’s energy ministry.

This work will continue, in both fulfilling the requirements of the energy reform in the short term and ensuring system reliability into the unknown future. Together with its partners, NARUC and USAID are committed to helping Mexico achieve its vision of a more reliable, transparent and inclusive electricity sector in Mexico.