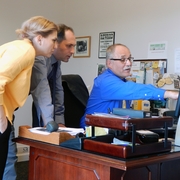 Officials with the Kosovo Energy Regulatory Office (ERO) are working to improve how they interact with the public.

Recently, the regulator significantly cut response times and opened the doors of the agency’s decision-making to greater transparency and public involvement. ERO also established an electronic customer care database that will enable the regulator to more efficiently respond to customer complaints and more effectively monitor licensees.

These gains come via the support of the US Agency for International Development (USAID) and regulators in Ohio, Kentucky and Pennsylvania. NARUC in collaboration with USAID facilitated interactions between Kosovar regulators and their US counterparts.

“We can now be more responsive to consumers and utilities, and we are better equipped to communicate and ensure that the public understands the value and role of an independent regulator in the electricity sector," Bujupi said. "These improvements will also help us prepare to meet Third Energy Package requirements and help Kosovo make further progress toward integration with the European Union."

Bujupi added, "NARUC’s assistance has been critical to our success, and we look forward to working with them in the future.”

NARUC collaborated with regulators at the Kentucky Public Service Commission to host ERO staff for a two-week job shadow on communications and public outreach in 2016. ERO staff were able to see first-hand best practices in public relations and stakeholder outreach from the staff at the Kentucky commission. They also gained insight on how to better raise awareness about ERO activities and reach consumers through the web and social media.

Highlights: Kosovo’s Partnership with NARUC
With the support of USAID, the ERO made significant progress in the last year in increasing transparency and accountability. The following are highlights of the policies and tools advanced in 2016:

Faster Response Times To Inform Public
Through the lessons learned from the job shadow, the ERO significantly improved day-to-day operations, reducing response times for routine media requests from one day to several hours. Staff also reduced response times and from two days to 24 hours for technical or sensitive requests. ERO also more fully integrated its public relations staff into organizational operations and took proactive steps to better inform the public about its work, including providing more advance notice for board sessions to increase public participation.

Likewise, ERO incorporated revisions made by Kentucky’s Director of Communications during the job shadow into its External and Internal Communications Strategies. These strategy documents were drafted and reviewed with the assistance of Ohio and Pennsylvania regulators as part of USAID-NARUC activities in late 2015.

Key Strategy Documents
The External and Internal Communications Strategies were both approved in late October 2016, just prior to NARUC’s Customer Care Database and Communications Plan activity.

“We are thankful to USAID for making this activity possible, as well as all partnerships with US regulators starting from 2008. Through these activities, we think that ERO has become much more transparent and proactive with public involvement in regulatory activities.”

NARUC experts have also assisted ERO’s Customer Protection Department in establishing a customer care database. Prior to this activity, the ERO received, reviewed and stored physical copies of customer complaints and tracked those complaints using Excel spreadsheets. Now, with the newly established customer care database that was developed during the activity, ERO will be able to more efficiently respond to customer complaints and more effectively monitor its licensees through the database’s enhanced reporting capabilities.

Preparing for Market Opening
NARUC also worked with ERO’s Public Relations Officer and Board on developing a draft Communications Action Plan to improve the commission’s engagement and outreach efforts to NGOs, media, legislators, stakeholders, and the public at-large. This draft plan was created in preparation for the upcoming electricity market opening in Kosovo and national reforms aimed at bringing the country in compliance with requirements related to the European Union’s Third Energy Package.

The Communications Action Plan outline, drafted by ERO with assistance from NARUC, provided specific advice on how ERO can implement its External and Internal Communications Strategies.