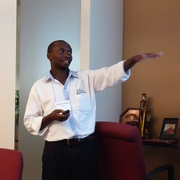 May 2017 – Last year, the Association of Energy Engineers honored the best and brightest from around the world for their contributions to energy efficiency and renewable energy at a ceremony in Washington, DC. Among these leaders in their field was a dedicated regulator from Kenya who helped bring marked improvements to energy efficiency practices in his home country.

Eustace Murithi Njeru of the Kenya Energy Regulatory Commission (ERC) earned the honor of 2016 Energy Engineer of the Year for the Sub-Saharan Africa Region. Mr. Njeru serves as a Technical Officer for the Energy Efficiency and Conservation at the ERC, and was honored in particular for his work developing and implementing the Energy (Energy Management) Regulations, 2012, in Kenya.

The energy management regulations Mr. Njeru worked to develop and implement have produced real improvements at many facilities. National Association of Regulatory Utility Commissioners (NARUC) wishes to celebrate Njeru for his award and for the success of the Energy (Energy Management) Regulations, 2012 in Kenya.

Mr. Njeru was among a group of international regulators selected to participate in NARUC’s Regulating Clean Energy International Partnership Program, supported by the United States Agency for International Development (USAID) in 2011. Through the program, NARUC trained regulators from Africa, Latin America and the Caribbean on how to advance clean energy through renewable deployment, energy efficiency and other means. The program included both technical workshops outside the US as well as internships at US Commissions, where foreign regulators like Njeru received hands-on training on particular clean energy issues.

Mr. Njeru said his participation in the program contributed much to his work on Kenya’s energy management and efficiency rules. Officially published in 2012, the rules require manufacturers and other large consumers of energy to perform energy audits and implement the audits recommendations on their processes and equipment.

Following participation in technical workshop in Nairobi in March 2011, Mr. Njeru applied through a competitive process to be awarded a short-term internship at a US commission. Mr. Njeru was placed with the Arizona Corporation Commission later that year, which he said brought a broader understanding of how to approach regulation for energy efficiency and clean energy.

Working with regulators in Arizona yielded lessons on rules for solar water heaters and energy efficiency, he said. Mr. Njeru also learned how to approach regulatory development, especially the use of technical standards and methods of effective enforcement.

These and other lessons were integrated into Kenya’s energy management regulations. The regulations cover a range of issues associated with performing energy audits, including licensing auditors, establishing energy efficiency implementation plans, implementing audit findings and ensuring that facilities benefit once those changes are made.

Between July 2014 and February 2017, 964 facilities have conducted energy audits, Mr. Njeru said, with the audits showing a potential savings of more than 22,000 MWh of electricity. As of early 2017, 10 facilities have fully implemented recommended changes and reduced their energy consumption by more than 2,500 MWh – this equates to a savings of roughly 366,505 US dollars per year over a three-year period.

Mr. Njeru said ERC will be assisting facilities to check and see if what they are implementing and the energy savings they are reporting make sense. He said “however, currently there is no reliable way of establishing the actual energy savings by facilities that are implementing the regulations.” Mr. Njeru mentioned that ERC would benefit from further assistance in developing a measurement and verification framework to better the evaluation of this energy management progress.

In Kenya and around the world, regulators are working to integrate renewable energy, implement sound energy efficiency policies and practices to provide a sound, fair path to more affordable energy namely electricity for all.

Together with the support of USAID and Power Africa, NARUC is committed to working with these regulators to ensure they have the tools and training necessary to meet this challenge.