Georgian Regulator Reflects on Growth, Relationship with USAID and NARUC 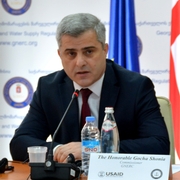 April 2018 – It has been more than 20 years since Gocha Shonia began working with the Georgian National Energy and Water Regulatory Commission (GNERC). First as a World Bank consultant and then as an employee, Shonia remembers the commission being early in its development at that time – less than ten commissioners and staff, with only a few regulatory documents in place.

Early on, GNERC began to collaborate with the U.S. Agency for International Development and the National Association of Regulatory Utility Commissioners, the association of state utility regulators in the U.S. Through exchanges on key issues facing regulators in Georgia and the U.S., Shonia recalls being “greatly impressed by the U.S. experience” and learning much on technical regulation and setting energy rates.

“At that time we had very narrow and standard vision and understanding of regulation,” Shonia says. “However, we saw that regulation was an art.”

Shonia worked his way up through GNERC and was named a commissioner in 2011, a position he has served with distinction since then. Along the way, Shonia played a key role in building a relationship between the Black Sea region and USAID that has helped foster greater energy security and market development.

Overall, this partnership provided the Georgian regulator with capacity building and tools to achieve its regulatory goals in line with EU requirements and policy objectives, including increasing cross-border trade and improving liberalization efforts. GNERC also made significant gains on regulatory effectiveness and transparency, both increasing engagement with the public regarding its own actions as well as the electricity system in general.

USAID/Georgia has a long history of assisting Georgia with reforming its critical energy sector. USAID/Georgia is proud that GNERC has such a knowledgeable and dedicated person who serves the critical energy sector in this country and expresses its sincere appreciation and gratitude towards him for his professionalism and leadership in helping Georgia achieve its goals of effective transitioning to competition and guarding the consumers.

“I see GNERC as a strong regulator empowered by all of the functions that an independent regulator should have,” Shonia says. “It is a great support to have partner organizations such as USAID and NARUC, who are always providing us with substantial knowledge and experience that helps us in developing our capacities.”

In 2017, Georgia acceded into the Energy Community, marking a major milestone in Georgia’s European integration efforts. USAID and NARUC supported GNERC through this process through an array of activities and targeted technical assistance that focused on bringing Georgia’s energy legislation and GNERC’s regulatory structure in line with the EU’s Third Energy Package requirements.

“Georgia is paving its way towards the European Union,” Shonia says of the accession into the Energy Community and other efforts. “The energy sector of Georgia is in a very important phase of its development, which is a result of challenges triggered by the obligation of transposing the Third Energy Package.”

During its longstanding relationship with GNERC, USAID and NARUC offered a host of training opportunities to commissioners and staff. Since 2007, USAID and NARUC provided more than 11,000 hours of training to GNERC staff on energy-related policy and regulatory practices. Shonia himself participated in a number of these trainings with U.S. regulators from Michigan, Kentucky, Vermont, Ohio, and other states on price regulation and regulatory best practices and said that these trainings improved his understanding and skills in many areas.

“USAID/NARUC activities helped us to get a clear understanding of regulatory principles. We raised our awareness in a number of issues starting from technical issues such as tariffs and service quality regulation,” he says, while also noting that GNERC developed key documents and practices through USAID and NARUC assistance as well.

The relationships built between regulators in the U.S. and Georgia also proved vital to his personal development and the growth of GNERC, Shonia said.

In 2008, Shonia and others travelled to Vermont for an exchange with the Vermont regulators on natural gas regulation, energy efficiency and rate regulation. During the exchange, the mayor of Burlington, Vermont, honored the visiting delegation by naming it a day for Georgia and presenting certificates to that effect to the delegation.

“We felt honored,” Shonia says, adding that the memory of that day “has been added to the set of his good and positive memories of joint cooperation.”

The feeling is mutual on the U.S. side as well, as regulators from the U.S. highlighted not only the growth of GNERC but also the quality of Shonia as a regulator and person.

“I can attest to the commitment of Commissioner Shonia and GNERC to developing a world class regulatory commission,” said NARUC Executive Director Greg White, who formerly served as a staff member and later commissioner at the Michigan Public Service Commission. White first travelled to Tbilisi in 2000, when GNERC was working to improve system reliability and provide a stable electricity system.

“Now the grid is 24/7, and GNERC is one of the real success stories for our work. Commissioner Shonia was there through it all,” White said.

“Gocha was a dedicated and consummate professional in every official interaction we had with him,” Melnykovych said. “Gocha had an unending curiosity about how and why we do things in Kentucky. The pointed questions asked by Gocha and some of his colleagues often prompted us to look at things from a different perspective. I found their questions particularly helpful in shaping the way in which we communicate complex matters to our stakeholders.”

Melnykovych also called Shonia “one of the nicest people I have met through USAID/NARUC exchanges.”

“He is considerate and kind, and has a terrific sense of humor,” Melnykovych said. “I should note that I learned much more about Georgian wine from Gocha than I was able to teach him about American baseball. Gocha is a very logical person, and I don’t think he saw any logic in the sport.”

Shonia is just one of a host of regulators who are helping to promote regulatory development, energy security and market opportunities in the Black Sea region and Southeast Europe. USAID and NARUC are proud to have played a role in his growth as a regulator and look forward to what he and others can do to transform the region’s energy sector.