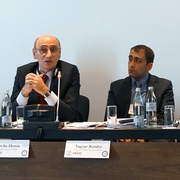 October 2016 – The Republic of Georgia has made significant progress in promoting clean energy generation by setting transparent rules for connecting small-scale renewable energy generators to the grid and enabling them to receive compensation for the produced electricity.

Earlier this year the Georgian Parliament adopted amendments to the 2011 Law on Electricity and Natural Gas to promote net metering and micro-generation.

The legislative amendments were followed by a revision of the Georgian National Energy and Water Supply Regulatory Commission’s (GNERC) 2008 Resolution #20, Electricity (Capacity) Supply and Consumption Rules to set the financial, organizational and technical relationships between Micro Generators and Distribution Licensees. These legislative reforms set the Republic of Georgia as a leader in the promotion of renewable generation.

NARUC’s regulatory partnership with GNERC seeks to support the Republic of Georgia’s reforms toward a European-oriented energy market and incentivize utilities to improve the quality of electricity supply and consumer service.

USAID and NARUC have leveraged the extensive regulatory knowledge and practitioner experience from U.S. regulators to support GNERC in promoting reforms and transitioning toward more competitive and clean electricity markets.

The United States Agency for International Development (USAID) supported GNERC through the U.S. National Association of Regulatory Utility Commissioners (NARUC), which was critical to ensure that the amendments to the law and the resolution complied with international best practices.

Reforms Improve Grid Access for Renewables
According to the new legislation, Georgian consumers who own up to 100 kW of wind, solar, biomass, and/or hydropower generation installations will be able to connect to the grid and reduce their electricity payments to local utilities. The amendments ensure that, at the end of the year, generation owners receive a credit for the renewable energy generated over the amount consumed.

These legal amendments will not only result in financial benefits for consumers but also lead to a reduction in greenhouse gas emissions and an increase in the reliability of energy supply through diversification of resources.

GNERC cites its partnership with NARUC as critical to the success of reforms. NARUC brought to bear expertise from experienced regulators in Maryland, New York, Pennsylvania, Ohio, Kentucky and Michigan, offering a broad range of viewpoints to their Georgian counterparts.

Net metering is a mechanism for compensating the owners of small, usually clean energy generators like combined heat and power facilities and rooftop solar. The owner consumes electricity from the resource, and if any power is left over, the extra is sold into the grid. Because these resources are “behind the meter,” the amount the owners sell is the net of what they generate and what they consume themselves.

NARUC's Support
NARUC experts reviewed draft versions of the amendments and made targeted recommendations — these included having the excess energy produced carried over to the next month’s bill and simplifying the connection procedures for micro-generation units so that the distribution company would be a “one-stop shop” for approvals.

USAID and NARUC are committed to working with GNERC to continue support for reforms in promoting clean energy and improving the quality of energy supply through promotion of investments and competition in generation.