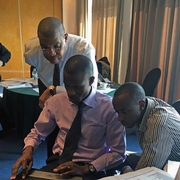 March 2017 – As they work to attract critical investment into the region, East African nations are implementing policies and tools to build a financially sustainable electricity sector. Officials in Rwanda, for instance, have plans to phase out direct subsidies to the state-owned utility and to build increased electricity interconnections with its neighbors on a path toward a regional market.

With the support of the United States Agency for International Development and Power Africa, regulatory officials in Rwanda recently joined colleagues from Tanzania, Ethiopia, Kenya, and Uganda in taking a big step in that direction. Regulators joined the Independent Regulatory Board (IRB) of the Eastern Africa Power Pool to finalize a regionally harmonized Uniform System of Accounts and a financial data collection template, tools that will help the countries unlock the energy potential of the region.

Regulatory Accounting Tools Yield Optimism
The countries have been working together since 2014 on regulatory accounting in partnership with the National Association of Regulatory Utility Commissioners (NARUC), which brings to bear over 100 years of regulatory expertise to support regulators in East Africa and around the world. Regulators in East Africa agreed on the need to develop a regionally aligned USoA, which will help support progress toward cost-reflective tariffs and increased generation and access.

“With enhanced regional power connections, the USoA will be a perfect instrument that will assist stakeholders as they undertake comparative analysis of utilities’ performance, both locally and regionally.”

Now that these tools are finalized, officials are optimistic that their implementation will positively impact the region’s electricity sectors.

“I am confident that the USoA will benefit our countries and our regulatory body,” said Ali Rudahunga, a market analysis officer at the Rwanda Utilities Regulatory Agency (RURA).

A Path To More Private Capital
Once fully implemented, the USoA and data collection template will streamline transactions and connections as well as enable further private investment. The tools will also help to promote cross-border trade by creating clarity in the pricing information that underpins transmission and wheeling agreements.

Given that national regulators are now building their USoAs off the regional version, regulators will be well positioned to more easily resolve disputes over power and transmission pricing and support proper cost allocation of transmission lines and other regional assets.

“With enhanced regional power connections, the USoA will be a perfect instrument that will assist stakeholders as they undertake comparative analysis of utilities’ performance, both locally and regionally,” said Robert Mahenia Githinji, Senior Manager of Legal Affairs at the Kenya Energy Regulatory Commission. “The USoA will enhance transparency and accountability in the tariff review process.”

About Uniform Systems of Accounts
The USoA allows a regulator to properly identify and allocate costs associated with the generation, transmission and distribution of power. The tool ensures that the regulator can do an apples-to-apples comparison of costs between utilities, both within the country and across borders. It also provides an accurate understanding of the true cost of power to regulators and stakeholders, which overall can help drive progress toward cost-reflective

Timely Assistance from NARUC and USAID
At an August 2016 activity in Kigali, Rwanda, representatives from the region’s regulators praised NARUC and USAID’s training and technical assistance support on the USoA and template. Vianney Mutyaba, a Principal Financial Analyst at the Uganda Electricity Regulatory Authority, said that NARUC’s assistance helped regulators not only better understand the USoA but also articulate its need to other stakeholders.

“The help that NARUC provided was timely on our side,” Mutyaba said.

Regulators also discussed how it would improve their individual abilities to set rates accurately, which supports not only cost-reflective tariffs but also a more efficient regulatory process at the commissions.

Looking ahead, regulators discussed next steps on their path toward a regional market, including harmonizing approaches to transmission and wheeling tariffs, updating grid codes and market rules, and continuing to build regulatory capacity.

NARUC stands ready to continue its assistance to the region in line with the goals and priorities of each country as well as USAID and Power Africa.