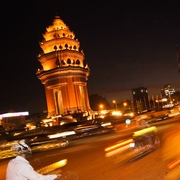 Cambodia’s electricity regulator — the Electricity Authority of Cambodia (EAC) — is taking critical steps forward to help improve the quality of the electricity service consumers receive. EAC is reforming how it handles complaints consumers raise against electricity suppliers, and is working to identify ways to educate customers about their service to address concerns before they ever become formal complaints.

Critical Support
With the support of the U.S. Department of State’s Power Sector Program of the Bureau of Energy Resources, NARUC is working with EAC to strengthen service quality in Cambodia and assist EAC in better managing the power sector. NARUC, the U.S. body representing state utility regulators, also works with EAC to support improved transparency in the Cambodian power sector through better reporting and monitoring.

EAC has recently had several successes in improving service quality for consumers. During discussions at a NARUC activity in Phnom Penh in September 2015, EAC officials noted significant consumer complaints relating to billing during the hot seasons, when consumers would have higher than normal consumption.

“I will use the U.S. customer complaint procedure from Michigan and apply it to our efforts in Cambodia. I shared this procedure with my colleagues and we are translating the text into Khmer to implement this in the future.”
— Thearith Chhim, EAC Chief of Section, Supply and Consumer Affairs, following a NARUC activity in Phnom Penh in June 2016

Improving Consumer Education
Based on NARUC recommendations, EAC required suppliers to include monthly consumption information from the previous twelve months on customer bills – this way, consumers could evaluate whether their electricity consumption was on par with what it was a year ago, rather than simply higher than it was during the cooler months.

This change has resulted in a reduction in consumer complaints about billing, EAC officials said. EAC also implemented NARUC’s recommendation to include a hotline number on bills for customers to more easily obtain information and resolve issues directly with suppliers when necessary.

These actions represent tangible progress in helping to improve customer awareness about electricity consumption while simultaneously strengthening trust and understanding between customers and electricity suppliers in Cambodia.

Improvements to Complaint Tracking
EAC officials also followed through on NARUC recommendations to improve how the Cambodian regulator tracks, records, and monitors progress on consumer complaints.

Previously, when consumers complained about suppliers’ service, EAC officials addressed the complaints on a case-by-case basis. As reported during the June 2016 NARUC activity in Phnom Penh, EAC has taken a much more systematic approach to complaints, including implementing a system similar to the e-docketing systems used by federal and state regulators in the U.S.

This allows EAC to not only track, record, and monitor complaints, but also identify specific suppliers that need to improve the quality of their customer service.

Connecting Via Facebook and Phone
EAC’s efforts also reflect the varied ways in which consumers provide feedback to EAC. Regulators’ recently implemented system includes the feedback EAC receives via Facebook each year, and staff are now available around the clock to respond to these comments.

EAC officials also noted they intend to implement a hotline number for customer complaints, based on a NARUC recommendation.

These actions provide a critical foundation for EAC to strengthen its customer service and monitoring efforts relating to service quality and enhance customer confidence in the power system and regulatory process. Together with its partners at the State Department, NARUC is committed to working with EAC to further improve the quality of electricity services in Cambodia.