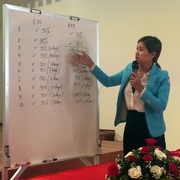 August 2016 – Improving electricity service quality is a top priority for Cambodia. The country has over 300 suppliers of electricity, about 30 of which are small and isolated from the national grid.

The national regulator – the Electricity Authority of Cambodia (EAC) – has committed to better enforcing standards for supplier performance and reliability. To do that, EAC needed to significantly improve its ability to collect, maintain, and analyze data from suppliers.

With the support of the U.S. Department of State’s Power Sector Program in the Bureau of Energy Resources, the U.S. National Association of Regulatory Utility Commissioners (NARUC) has helped EAC improve this ability by leaps and bounds.

Improving Performance Standards
While EAC has had performance standards in place for over a decade, the regulator had not yet begun to enforce those standards or collect the necessary data to evaluate service quality. During a September 2015 activity in Phnom Penh, NARUC experts made a number of recommendations for how EAC could take these steps forward.

In particular, NARUC recommended that EAC require all electricity suppliers to collect data on key performance metrics and report that data to EAC. These metrics include how long it takes suppliers to restore service after an outage, connections of new customers, and how the supplier responds when customers complain about voltage levels or billing disputes.

At a follow-on activity in Phnom Penh in June 2016, EAC reported it had followed these and other NARUC recommendations and moved ahead with more robust data collection.

Implementing Data Collection Reforms
EAC contacted the more than 300 suppliers throughout the country to inform them of new data collection and reporting requirements. All suppliers in the country are currently collecting data for these categories over the current year.

“NARUC raised the example about the carrot and the stick [approach to regulating suppliers]. For many years, we have worked with suppliers to hold their hand, train them, say good words, and move forward with them to the same destination.

Now, we believe that we should say transparently to suppliers, ‘if you do not follow our rules and standards, EAC will take actions that could result in penalties or revoking of licenses.’”

— Yim Viseth, EAC Director of Supply and Consumer Affairs, speaking at a NARUC activity in Phnom Penh in June 2016.

During the June 2016 activity, participants discussed how EAC should act upon data once it is received, including potentially ranking the hundreds of licensed suppliers based on performance. EAC officials noted that performance quality could have implications for the license renewal process for suppliers.

Developing Better Benchmarks
NARUC and EAC officials also discussed optimal targets for these metrics during the activity. EAC officials said they would develop tailored benchmarks for different types of licensees, including EDC, the large state utility, and the smaller Rural Electricity Enterprises (REE).

“From this peer review, we have learned how to develop good benchmarks for Cambodia,” said Theng Marith, EAC’s Director of Generation, Transmission, and Sub-Transmission. “We now know that we must separate big suppliers like EDC and small suppliers like REE. These suppliers are very different in terms of scale, location, and customer understanding.”

Based on NARUC recommendations, EAC is also working to enact best practice standards in evaluating the performance of electricity suppliers. The System Average Interruption Duration Index (SAIDI) and System Average Interruption Frequency Index (SAIFI) are metrics frequently used around the world to demonstrate the reliability of a service provider. Recently, NARUC experts recommended that EAC take a collaborative approach to implementing these metrics, noting that severe weather and other outage causes are often outside the control of local suppliers.

EAC’s actions represent a first step to successfully implementing a monitoring and enforcement mechanism for its performance standards. These steps will help to support the identification and rectification of trouble spots in the Cambodian power system in order to improve overall service quality throughout the country moving forward.

In collaboration with the State Department, NARUC will remain engaged with EAC as these and other reforms continue.