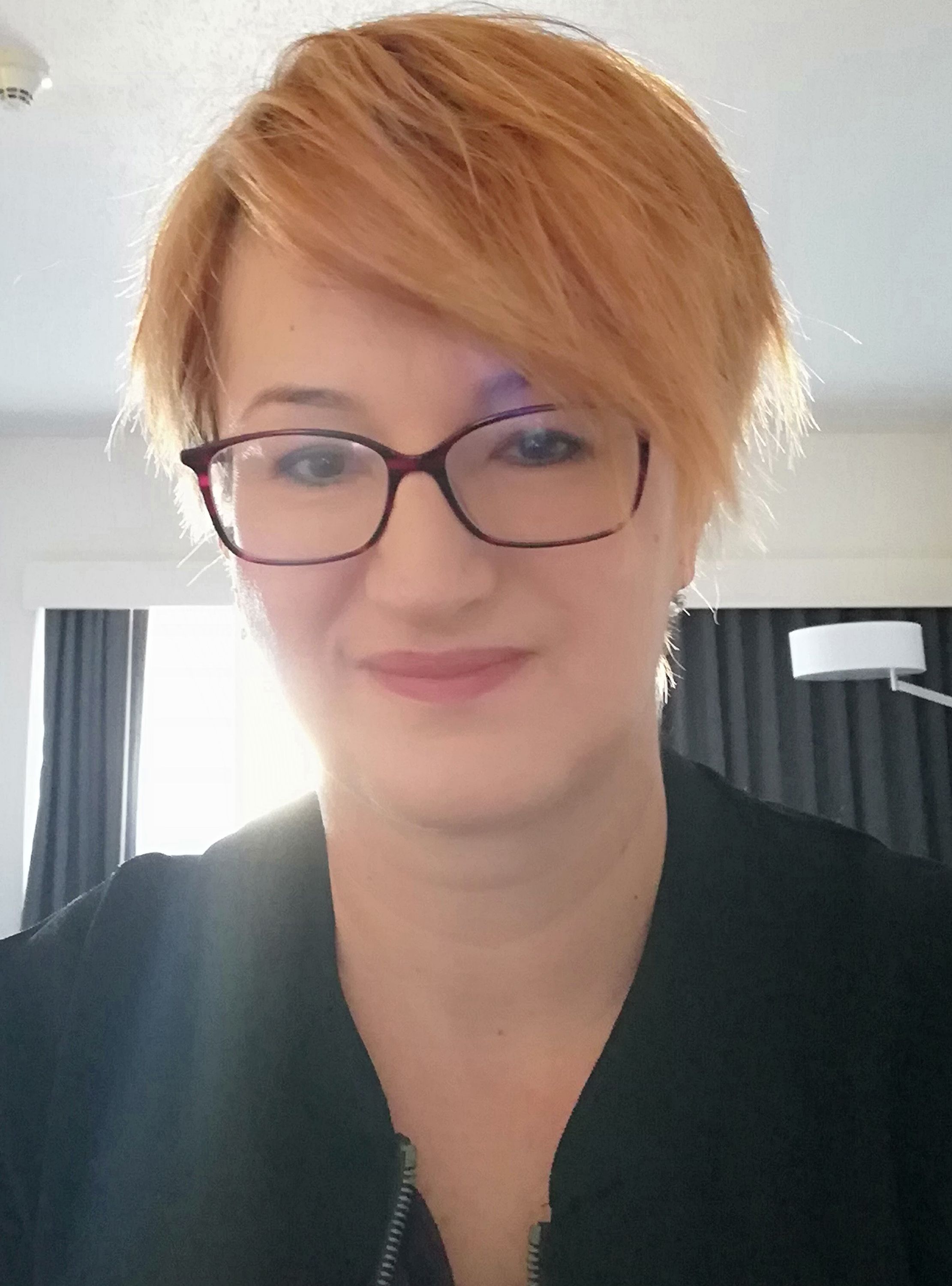 October 2022 – While many countries around the world are working to improve their legal, institutional, and strategic mechanisms to advance gender equality, women still experience discrimination in hiring procedures, promotion, and termination of employment.[1] Further, occupational segregation by gender is another challenge. Most women are employed in the service sector and are overrepresented in sectors such as education, health care, and social work activities, typically considered to be “female occupations,” which allows gender stereotypes to further exclude women from occupations traditionally perceived as male.[2] This is especially noticeable in the energy sector, across all levels of jobs and the majority of countries.

In Bosnia and Herzegovina (BIH), the Law on Gender Equality[3] and the Gender Action Plan (2018-2022)[4] are tools the country is using to improve gender equity in the BIH energy sector, where 17% of employees are women and only 6% are in top management positions.[5]

In 2020, the United States Agency for International Development (USAID) and the National Association of Regulatory Utility Commissioners (NARUC) launched the Advancing Women Leaders in Energy (AWLE) project, which is funded by USAID’s Women’s Economic Empowerment Initiative. 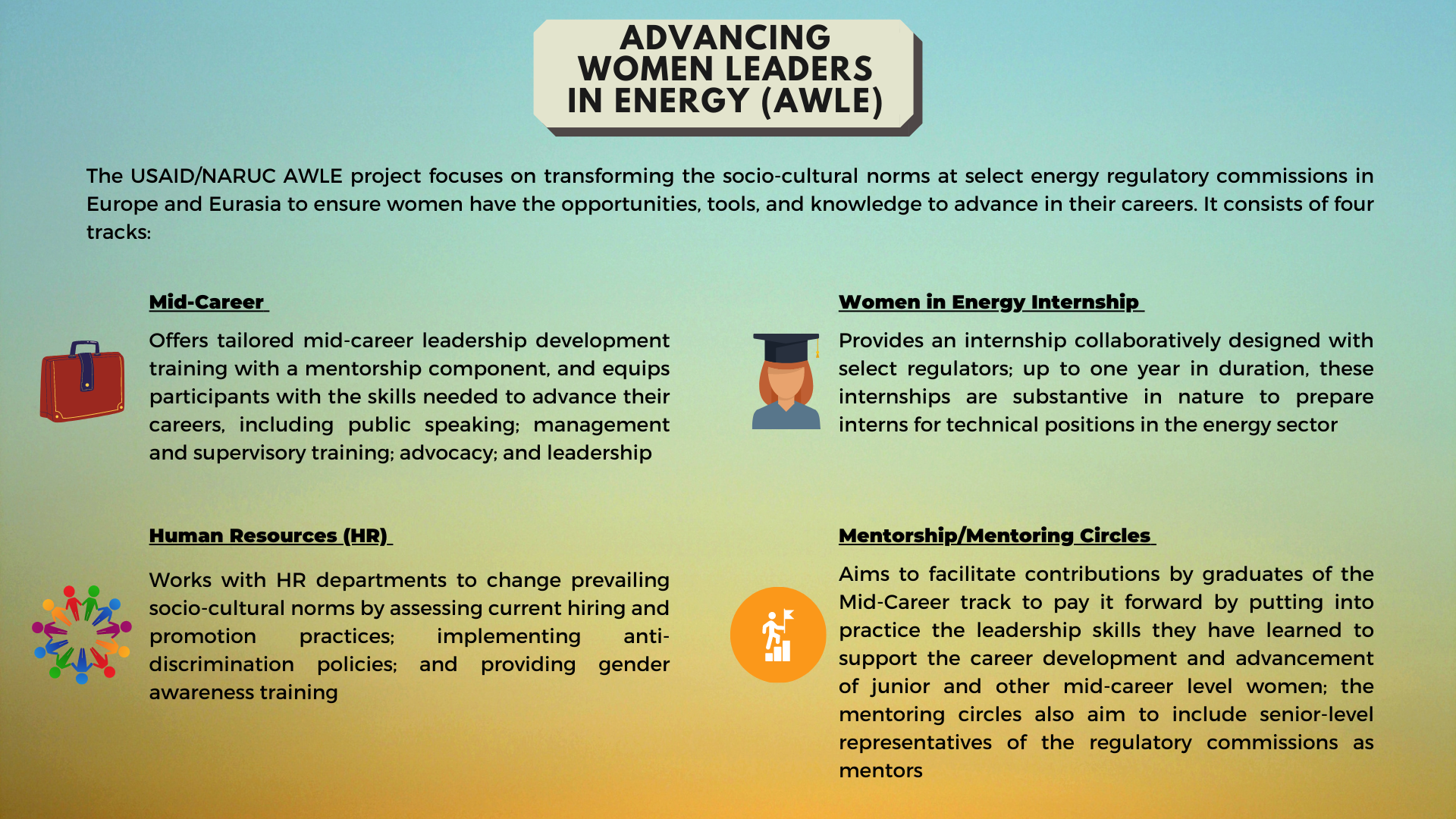 NARUC recently connected with Ivana Boro Tomic, who graduated in October 2021 from the first group of the Mid-Career Track, to learn more about her experiences as a woman in the BIH energy sector and how she has put what she has learned into practice. Ivana works at the Regulatory Commission for Energy in Federation of Bosnia and Herzegovina (FERK), and recently gave a speech as part of a panel on “The Role of Women in the Just Transition of the Energy Sector”[6] at the Energy Summit in BIH in 2022.[7] This panel highlighted “the insufficient representation of women in high positions in the energy sector” and considered how women can implement sector reform.

How did you first get involved in your current work?

I started working as an interpreter for the Organization for Security and Cooperation in Europe (OSCE) while I was still a student at university. That was during the after-war period when BIH was building its institutions and rebuilding its political and economic system. The experience I gained during two years of working as an interpreter and a core trainer for election staff led me to apply for the position of administrative assistant and interpreter posted by a public electricity company, where I worked for almost five years. When FERK was established, I applied, and now I have worked here for 18 years.

What challenges did you face in building your career in this sector?

Being “supporting staff” is not easy, neither in a public electricity company nor in a regulatory commission. Challenges come daily as you have to deal with terminology, ever-changing market and legal terms, new technologies, and relations with your colleagues. I was scared at first; the energy sector is often represented as a predominantly male sector where engineers are treated as more important than other staff. Although there is some truth to this stereotype, I personally had great experiences and supportive male colleagues during my time working at the public electricity company who helped me overcome obstacles I faced when I first joined. I never felt different because of my gender. At FERK, the consultants from USAID who were with us at the time also provided me with great assistance. They acted as my mentors in a way and supported me in my daily work by giving me advice on how to overcome barriers and to perform better.

Why do you think it is important that women have opportunities to play an equal role in the energy sector?

I think it is important that women and men participate equally in all aspects of life to help promote societal growth. There is a trend occurring in the educational sector right now where employees are almost entirely female. This trend is not good in the same way that it is not good for the energy sector to be mostly made up of male employees. Everyone should be given equal opportunity considering only their competency for the specific job for which they have applied.

In your speech at the BIH Energy Summit, you noted that there has been an increase in women as technical staff. Over what time period have you seen this change? Why do you think this is, and how do you think we can best encourage this trend/continue in this direction?

I have noticed this in the last 10 years, although I have met women engineers when I was working for the public electricity company. At FERK, I was a member of the commission for the admission of staff for a few years, and saw that applications made by female engineers grew with time. I think that the situation in society is changing as more young women are interested in science, technology, engineering and math. Maybe the reason is due to new technologies or a shift in the atmosphere around the energy sector, but I now see more women in the sector as a whole.

Was there a specific session or topic during the AWLE Mid-Career Leadership training that resonated with you the most, and if so, how do you plan to incorporate it into your career?

All sessions were useful to me, and I am already using the skills in my daily work, but I would say that working on my presentation skills was most useful because of the nature of my job.

Did you have an "aha" moment in any of the sessions as part of the training, and have you seen a change in how you approach certain issues since then?

Yes, I have finally accepted my recorded voice. After so many years! Speaking in public is not difficult for me as interpreting is a form of public speaking; however, being in front of a camera and recording my voice has always been challenging. I studied journalism for three years and was taught to speak in front of cameras and for the radio. However, I did not truly gain confidence in it until I presented my recorded video during this training. This newfound confidence was also my reason for accepting an invitation to be a panelist at this year’s Energy Summit. Another thing I took away from the training was an enhanced knowledge of project management, which has been a subject of my interest for a long time. Right now, it is not applicable to my daily work, but who knows what the future will bring?

How would you suggest combatting/changing the perception of the energy sector as predominantly male and increasing women's participation?

There should be a positive approach to educating young women about the energy sector as early as when they are applying for high school. The decision of what you want to be when you grow up is mostly formatted in those so-called “formative years,” after the end of elementary school and approaching high school. You already know what you are good at, and you are thinking about possibilities. So, it is the best time to approach future energy professionals and make the energy business appealing and interesting to them.

What message would you send to women who may be interested in building their careers in this sector?

Do not be afraid to step in. Energy is an interesting, dynamic, life-like sector with many great opportunities for learning new things, meeting people, and being a part of something important. It is not a “men only club;” there are a lot of great women in the energy business.

Providing continued support for women in the energy sector

In the energy regulation industry, and specifically in BIH, there are hurdles to women’s professional success. However, with tailored training from programs like the AWLE project and engagement from commissions such as FERK, women in the energy sector are increasingly empowered to succeed in whatever capacity they choose. Ivana Boro Tomic is a great example of how women can thrive when given the opportunity, and NARUC welcomes FERK’s continued participation in the AWLE project.

By improving women’s leadership skills such as communication, project management, and negotiation, the AWLE project is helping women to take charge of their careers. Together, the four tracks focus on supporting the career advancement of women in Eastern Europe and Eurasia, changing socio-cultural norms and policies at the institutional level, helping open up new avenues for young women to gain exposure to energy regulation, and leveraging the knowledge and skills of women who have more experience in the energy sector to guide those who are just starting out.

[4] “GENDER ACTION PLAN OF BOSNIA AND HERZEGOVINA 2018 – 2022.” Agency for Gender Equality, Ministry of Human Rights and Refugees of Bosnia and Herzegovina. https://arsbih.gov.ba/project/gender-action-plan-of-bosnia-and-herzegovina-2018-2022/

[5] “Only 6% of women in a managing position in the energy sector in BiH.” UNDP. 2022. https://www.undp.org/bosnia-herzegovina/news/only-6-women-managing-position-energy-sector-bih#:~:text=Among%20the%20total%20number%20of,are%20in%20top%20management%20positions

[6] “III Panel Discussion – The Role of Women in the Just Transition of the Energy Sector.” Energy Summit 2022. https://energetskisamit.ba/iii-panel-diskusija-uloga-zena-u-pravednoj-tranziciji-energetskog-sektora/

[7] For more information on the summit, visit: https://usaideia.ba/en/news/energy-summit-in-bosnia-and-herzegovina-2022-held-in-neum/1219/