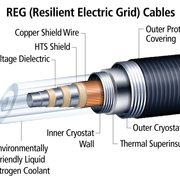 AMSC and ComEd previously entered into a commercial contract as part of the ongoing U.S. Department of Homeland Security (DHS) Science and Technology Directorate’s initiative to secure the nation’s electric grid against extreme weather and other catastrophic events. Utilizing AMSC’s Amperium® high temperature superconductor (HTS) wire and other sub-system design elements, REG systems were developed to provide capacity and resiliency in novel ways — by empowering urban power grids to network new and existing substations in a manner that had been unfeasible with traditional technologies. For the Chicago application, when portions of the grid are lost for any reason, be it aging equipment, cyber threats, or weather-related disasters; substations linked by distribution level voltage REG systems can transfer transmission level power to provide extra capacity and redundancy, which would normally require large and expensive transmission infrastructure and the associated difficulties implementing them in a tight urban environment.

AMSC’s project in Chicago is a fine example of a typical REG system application. The Chicago Central Business District is one of the most important economic centers in the United States. This critical electric grid meets all applicable reliability standards but is nonetheless vulnerable to disruptions caused by failing equipment, man-made attacks or catastrophic events. Improving the resilience of the grid in that dense urban center, like other major cities, is inherently difficult because of space, permitting requirements and other engineering constraints. Superconducting technology provides a new solution for this problem – allowing installation of bulk-power backbone facilities with a compact footprint that operate at low voltage. In short, REG systems limit the need for the additional grid infrastructure typically required to achieve greater capacity and resiliency, which in turn mitigates cost, land acquisition, permitting, and environmental impact tremendously.

REG systems may replace oil-filled and gas-insulated technologies, further reducing environmental risks. While there are environmentally friendly and security-enhancing benefits to REG system installation, they’re also built into its design; all aspects use environmentally friendly materials, dielectrics and coolants (in particular, Liquid Nitrogen); among other security features, REG systems utilize no software aside from monitoring systems and are generally not susceptible to cyber attack.

Engineering work for Chicago’s first REG system project began in 2019 and AMSC is on schedule to deliver the REG project hardware in 2020. The REG system is expected to be operational in the spring of 2021. On May 28, 2019, the Federal Energy Regulatory Commission (FERC) of the United States approved a first-of-its-kind rate base cost recovery method for Chicago’s two-part REG system installation, stating that while the system is at distribution voltages it provides transmission-level functionality and can be treated as a transmission asset for cost recovery purposes. This further reduces financial risk for utility customers, and provides precedent for attractive cost recovery for REG system installations.