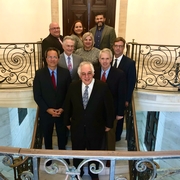 As Puerto Rico seeks to rebuild its infrastructure after Hurricane Maria and this year’s devastating earthquakes, the National Association of Regulatory Utility Commissioners (NARUC) and the National Regulatory Research Institute (NRRI) are working with regulators in Puerto Rico to exchange ideas about similar undertakings on the mainland. To support this effort, NARUC and NRRI are working with the U.S. Department of Energy to establish a regulator-to-regulator exchange of ideas and best practices in the energy, telecommunications, and consumer service areas.

NRRI and NARUC kicked off this exchange with two days of meetings in San Juan, Puerto Rico, February 27 and 28, to link U.S. public utility commissioners and staff with their counterparts in the Commonwealth. The meetings included a series of informational and collaborative sessions designed to facilitate the exchange of knowledge among the participating commissions. The project was organized by NRRI, in cooperation with the Puerto Rico Energy Bureau. It is funded by DOE and designed to expedite the development of the Puerto Rico Public Service Regulatory Board through one-on-one discussions with commissioners and staff facing similar problems.

As Puerto Rico Energy Bureau Commissioner Lillian Mateo-Santos put it, “the delegation was the beginning of a meaningful collaboration and knowledge exchange.”